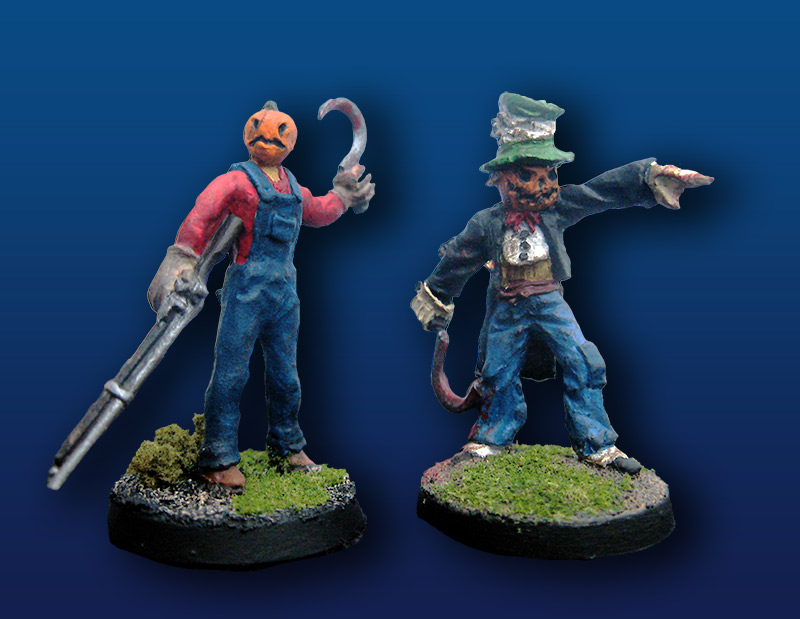 Description: Silas Murphy (aka the Pumpkin Whisperer) has the enchanted ability to trap lost souls of the Living within inanimate objects such as scarecrows and pumpkins. Silas raised his personal army of Sinister Scarecrows to combat the Wicked Werewolves responsible for his wife’s death. While not the most powerful army in weaponry or Size, the Sinister Scarecrows are large in numbers and are skilled in close quarters, plus they are a truly horrifying sight to see on the battlefield.

Captain Bix Max
Captain Bix Max is one of several Field Commanders of the Sinister Scarecrows. Before Silas trapped his soul inside an animated scarecrow host, Max was an officer in the US Marine Corps stationed in Louisiana. Bix Max now faithfully serves his new Commander on and off the battlefield and shares Silas’ desire to wipe out the Wicked Werewolves.

Crusoe
Crusoe was a Beng-Arii Syndicate Assault Rifle Specialist until killed in battle against the Sinister Scarecrows and resurrected into serving the very man who slew him. Crusoe is now an invaluable soldier on the battlefield – the first of a new breed of scarecrows armed with ranged weaponry. Crusoe enjoys shooting birds when enemies aren’t in his crosshairs.

The Sinister Scarecrows were originally sculpted and released by Fiendish Fabrications for use with Kaiju Kaos. In late 2011, Bailey Records purchased the rights and sculpts to these figures, remolded them, and now produce and distribute them through Acheson Creations.